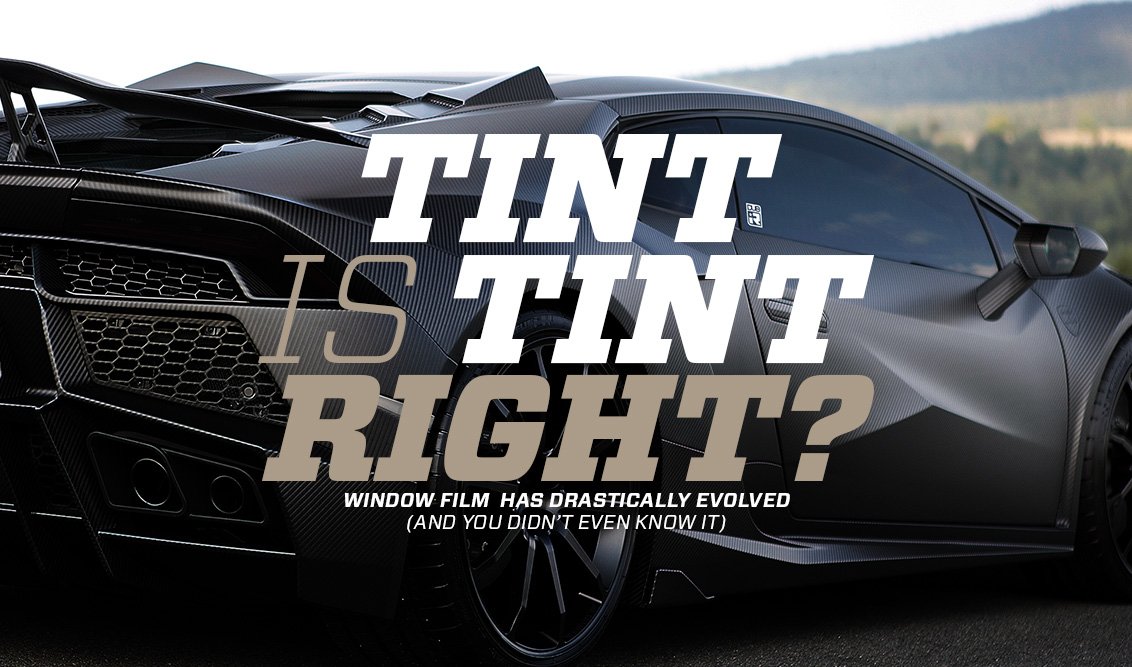 If you’re like most people, you probably assume all vehicle window tint is the same. Sure it comes in different shades of darkness and maybe even varying levels of reflectivity, but it’s basically all the same, right? Actually, no.

The truth is that the world’s ever-advancing technology has created significant differences that are important for you to understand before getting window tint put on your next ride.

First, let me begin with a little history, the evolution of window tint. At one time, not too long ago, window tint fell primarily into two simple categories.

First, you had the basic dyed polyester film. This was typically inexpensive and just gave your windows the tinted appearance you were looking for without much in the way of performance. These dyed films often had a limited lifespan, typically turning purple after three to five years of sun exposure.

The other tint option you had available was metalized film that integrated a layer of metal to the dyed polyester, giving the tinted look while providing a little bit of heat rejection. These films cost more than the dyed films and were considered the upgrade option in most shops. The performance was better and the film lasted longer because of the metal layer. The downside to metalized films was that they had more reflectivity (because of the metal layer) and they could interfere with the vehicle’s electronics and antenna systems.

Unfortunately, for many years, these were the only two window tint options someone had when wanting to get their vehicle’s windows tinted…the supposed ‘good’ dyed film and the ‘better’ option of metalized film. Neither was truly ideal. To achieve a higher heat rejection, your only choice was to just go with a darker shade. Well, those days are long gone! Fast-forward to 2016 and the recently launched color-stable (no fading) nano-ceramic DUB iR Luxury Window Tint to see just how far film technology has come.

DUB iR Luxury Window Tint is light years ahead of historic vehicle window film and should be at the front of your mind when you’re looking to upgrade the performance of your vehicle. Unlike traditional window tint that needs to be darker to achieve any performance, with DUB iR and it’s superior infrared blocking technology installed, you achieve an extraordinary degree of heat rejection, even from the lightest of shades (DUB iR 70% has a Total Solar Energy Rejection of 46%). DUB iR is non-reflective and won’t interfere with any electronics as its construction is nano-ceramic, not metal. The look is a true black hue, making it appear factory installed. Shades available include 5% (limo), 20%, 35%, 50% and 70%.

Another important note about the DUB iR window film is that it creates a protective barrier from the sun’s damaging UV rays for both your skin and the cabin of the vehicle. Studies show the incidence of skin cancer among passengers corresponds directly with the side of their body exposed to the window. For example, a driver in North America tends to have a higher rate of skin cancer on their left side, the one exposed to the sun while driving. DUB iR window film is recommended by The Skin Cancer Foundation as an effective protection from the sun.

So, as you can see, not all tint is created equal. When you go into your local tint shop, make sure to ask what types of film they carry. Understand the film technology they use so you can make an informed decision for your car and more importantly for yourself. Often, if you just ask to have your vehicle tinted a specific shade, the shop will use the least expensive window film they carry. This may give you the look you want, but you may miss out on the performance you could have. Tint shouldn’t be an afterthought. Most of us don’t compromise when it comes to the vehicle we drive. Why should we compromise on our tint?

DUB iR Luxury Window Tint comes in a variety of shades to suit your taste. Check your local tint laws to see what shade is legal in your state.